Spring Is My Favorite Season

Poor abused blog! I promise to have some new words here soon. Meanwhile, here are some pictures of Rainbow's End in spring that I found when I emptied the camera last week.

0 wags of the tail

Dream a Little Dream for Them

Here we are in the final week of the I <3 Dogs Blog Tour. The theme this time: If I had a dream ... What would you do for rescue dogs if you could?

Don't forget to visit Tour Host Small Town Rescue for links to other blogs participating this week and to see how you can win prizes!

I'm also sponsoring a challenge there: I'll price-match small donations to Pawsibilities Are Endless, so you can double even as little as a dollar to help rehabilitate and rehome the dogs these generous-hearted volunteers work tirelessly to support.

~~~
The easy answer to what I would do for rescue dogs is, of course, to take in as many as possible to foster. With that, though, comes the responsibility.

I bought my little farm, Rainbow's End, with the express purpose of fostering -- or of becoming a perennial foster flunkie for  -- neglected and abused critters, be they any species. I expected to take on only a handful in the beginning since I had a full-time-plus job, then ease my way more fully into it after I retired. It started out promising enough: 2 dogs, 2 goats, 5 cats and a couple of chickens came wandering in and stayed. I strung a bit of new fence, added a couple of barns and brought in some little horses.

Then I retired earlier than planned. And jumped into a second, part-time-ish business I also hadn't planned for. Many of the practicalities of adding kennels and a common play area for dogs and additional pastures for equines and llamas and whatever other large animals might come are still needing answers, such as what to do with all the waste? With our high water table, can I put in a septic system capable of handling more than a dozen dogs? (My breeder friend thought she'd found a way to deal with the problem by letting her dogs use my front pasture. Um, no.) And how many grazing animals can 27 acres really support?

Right now I don't have enough permanent dog-containing fencing to be able to keep a dog separated from the rest of the critters while it adjusts. While I keep my smaller animals, including the goats, penned in at night as a first defense against coyotes, they also free-range during the day and intermingle with one another. One doggy door in the house leads to a backyard that's home to 5 ducks and a rooster. That means accepting only animals who can get along with others. And while I did rehabilitate one dog that thought the chickens were here as part of the daily buffet, I don't want to lose any more friends to any more misunderstandings.

I also would love to take in a wild burro or mustang; however, the fencing I have (T-posts and a mix of 4-foot-high wire strand and no-climb horse fences) won't pass the minimum standards for the Bureau of Land Management to consider me as an adopter.

I've budgeted well enough to take in several more critters and be able to keep them in food and medical care. But the money needed to build the accommodations I dream about just isn't there. Writer though I am, and dealer in dreams in that regard, I'm a pragmatist in most other matters. The hordes of animals (though never hoarding!) I envisioned caring for simply will not be -- yet. But I can still make a difference one life at a time, taking in a critter here and there and ensuring they understand the rule of tolerance we have in place.

In fact, I'm thinking it's time to expand our family once I get back from the book convention I'm at this week.   I'll be on the lookout for a shelter dog come May. I also have a neighbor who has two goats that belong to a daughter who'll be off to college in the fall. They'll likely come my way in a month or so. And if we fall into another drought this summer, I have a couple of horse rescues I'm ready to contact in August.

Of course, I'm open to a change in circumstance. One day, I may still have the kennel of homeless dogs and barn full of horses and other larger critters that once I dared to dream about. For now, we'll take it one wiggly butt at a time.
4 wags of the tail

Welcome to Week 7 of the I <3 Dogs Tour. This week's theme: Favorite Dog Parks and Dog-Friendly Attractions.

Visit Tour Host Small Town Rescue for links to other blogs participating this week and to see how you can win prizes!

I live in a small village in northern Virginia that is especially popular with dog owners. It’s called the Village of Shirlington, and it has all kinds of things for dogs and their owners to enjoy!

In a previous guest post, I mentioned one of the local pet shops, Dogma, is in the area. This bakery and boutique has established a solid niche in the village, where pet-friendly condos and apartments abound. 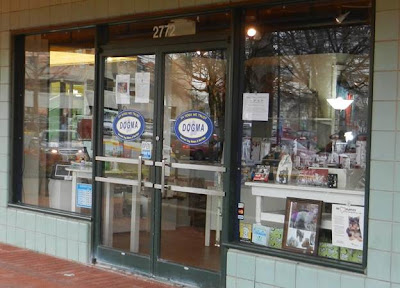 Other neighborhood stores also cater to the pooches. Many restaurants provide outside seating that you can share with your pup. Stores also place water bowls on their sidewalks so furry friends can grab a refreshing drink as they walk by.

And you’ll see people walking dogs around town almost any time of day. Some people take their dogs for a stroll along the tree-lined bike/jogging path that runs along one of the main streets on the perimeter of the village. 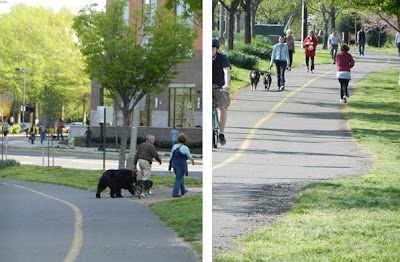 Others stop by the local dog park to let their dogs run off leash. The park offers a quarter-mile or so stretch of land for dogs to roam around, release some pent-up energy, and socialize with other dogs. It even has a smaller section cordoned off for puppies and smaller dogs to play without being intimidated by bigger dogs.

The park also provides access to a local creek where water-loving dogs can swim, play, and fetch. Buttercup is not a fan of water, but there are plenty of dogs that absolutely love this feature! 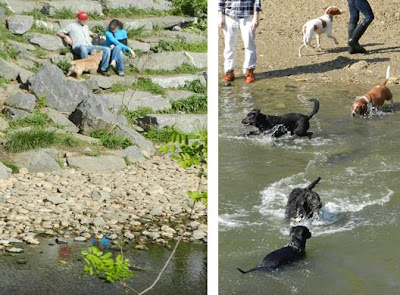 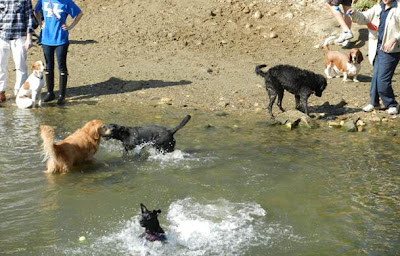 When you’re done playing in the dog park, you might need to rinse your dog off before you head home. Conveniently enough, there’s a shop just a few steps from the park called The Muddy Mutt that offers self-serve dog washing as well as professional grooming. 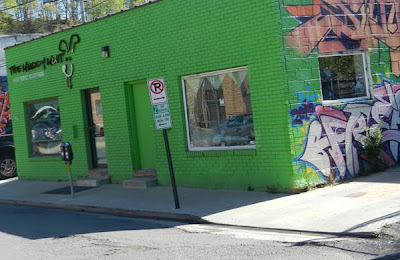 The village also hosts annual events, such as Wags and Whiskers – an outdoor festival where you can bring your pet, visit a variety of pet-oriented vendors (pet-sitters, trainers, rescue organizations, animal food/treats,  etc.), enjoy live music, see demonstrations, participate in a trick-or-treat contest, and even get a pet portrait.

Don’t have a pet? You’re in luck – the Animal Welfare League of Arlington is just around the corner! This nonprofit humane society offers a variety of training and clinics, such as Helping Community Cats Workshop, Dog Obedience Classes, and Microchip Clinics. It also sponsors events like Walk for the Animals and Dining Out to raise money for its cause. 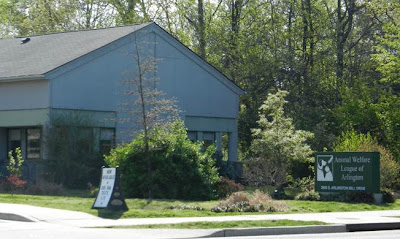 With all of these dog-friendly amenities, it’s easy to see why Buttercup and I like living in Shirlington. Maybe you can stop by to visit some time!

1 wags of the tail

30 years ago I was a vet tech in a large city. Today I live on a small farm in rural Texas I've named Rainbow's End. In between, I learned to dance to the rhythm the animals teach. And now I have stories that are not just my own to share...

The Beastie Roll At Rainbow's End

Get Your Daily
Animal Junkie Fix 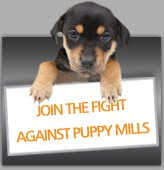